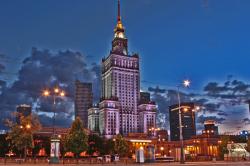 Annual General Meeting, also known as the AGM, is the main decision-making body of ESN International. All the official sections of our network are invited to the AGM to decide about how the network should be run the following year. The AGM usually takes place in March or April and lasts for four days. As the AGM is a perfect opportunity to exchange information between all sections, a lot of time is dedicated to different workshops on Local Level, National Level and International Level.

The best occasion to get to know the rest of ESNers is of course EuroDinner. It is the biggest and the most sumptuous feast in the year. AGM guests are invited to try traditional dishes from the whole Europe, meet volunteers from other countries and share their own culture with over a thousand people from the farthest corners of the world.

The fancy Gala dinner is not only an elegant final party of the AGM, it is also an award ceremony for the ESN Star Awards. This beautiful tradition started in 2008 at AGM in Besançon (France) to award the best projects, activities, sections, and countries of the ESN network.