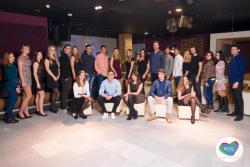 Erasmus Date Auction is an event successfully organized by Poznań ESN sections for three years, actually like their colleagues from other Polish cities. The scheme is always the same: some people put their free time up for auction, and others bid with whom they would like to meet up. And so the sponsors of this event, who never lack, take care that these meetings etch on participants’ memory. The biggest attractions are obviously waiting for those who give the largest amounts of money. Following the previous years, also this year the bidders spared no money; the most expensive meeting was “sold” for... 550 złoty! Altogether, as many as 28 individuals from different parts of Europe put their free time up for auction. A figure of 4377 złoty was raised – part of this sum coming from the lottery additionally organized during EDA. On entering the club everyone interested could buy a 10-złoty lottery ticket with a number. During an interval at the gala the draw took place. The lucky number holders received attractive prizes, such as a chance of flying in a real flight simulator. For the dates paired up as a result of the bidding there waited, for example: a two-day stay in a luxurious suite in the city of Świnoujście, a private plane flight over Poznań, and a professional photo session. As the gala came to an end, the less official part of the event began. Students went on to the dance floor and had fun in the club until late at night.